June has long been recognized as LGBTQ Pride Month, in honor of the Stonewall riots, which took place in New York City in June 1969. During Pride Month, it is not uncommon to see the rainbow flag being proudly displayed as a symbol for the LGBTQ rights movement. But how did that flag become a symbol of LGBTQ pride?

It goes back to 1978, when the artist Gilbert Baker, an openly gay man and a drag queen, designed the first rainbow flag. Baker later revealed that he was urged by Harvey Milk, one of the first openly gay elected officials in the U.S., to create a symbol of pride for the gay community. Baker decided to make that symbol a flag because he saw flags as the most powerful symbol of pride. As he later said in an interview, “Our job as gay people was to come out, to be visible, to live in the truth, as I say, to get out of the lie. A flag really fit that mission, because that’s a way of proclaiming your visibility or saying, ‘This is who I am!’” Baker saw the rainbow as a natural flag from the sky, so he adopted eight colors for the stripes, each color with its own meaning (hot pink for sex, red for life, orange for healing, yellow for sunlight, green for nature, turquoise for art, indigo for harmony, and violet for spirit).

The first versions of the rainbow flag were flown on June 25, 1978, for the San Francisco Gay Freedom Day parade. Baker and a team of volunteers had made them by hand, and now he wanted to mass-produce the flag for consumption by all. However, because of production issues, the pink and turquoise stripes were removed and indigo was replaced by basic blue, which resulted in the contemporary six-striped flag (red, orange, yellow, green, blue, and violet). Today this is the most common variant of the rainbow flag, with the red stripe on top, as in a natural rainbow. The various colors came to reflect both the immense diversity and the unity of the LGBTQ community. 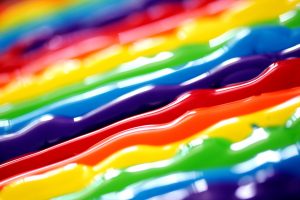 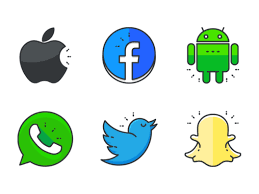